This designation gives Algernon Pharmaceuticals, as the therapy’s developer, certain incentives including tax credits, fee waivers, and a guarantee for seven years of market exclusivity if the therapy is ultimately approved by the FDA. The company filed for the designation a few months ago.

“We appreciate the U.S. FDA’s decision to grant ODD [orphan drug designation] status to Ifenprodil for IPF, a disease for which prognosis remains dismal,” said Christopher Moreau, CEO of Algernon, in a press release. “This regulatory milestone comes at an important time in the development of Ifenprodil as a potential new therapy for IPF, as we plan the next steps for our clinical program.”

Algernon recently announced the completion of a Phase 2a clinical trial (NCT04318704) that tested NP-120 in 20 people with IPF and chronic cough. Participants were given 20 mg of the experimental treatment, three times daily, for 12 weeks (about three months).

Top-line data showed that more than half of participants had stable or improved lung function over the course of the trial, a significant difference compared with what would be expected without treatment.

Most patients also reported a reduction in coughing and improvements in overall health status and quality of life. NP-120 was generally well-tolerated, with no unexpected safety-related findings reported in the trial.

Algernon has previously announced plans to conduct a larger Phase 2b study to further evaluate NP-120 as a potential therapy for IPF.

NP-120 is designed to ease coughing and reduce IPF progression by interfering with glutamate signaling. The therapy specifically works by blocking a subunit of the N-methyl-D-aspartate (NMDA) receptor.

Glutamate is a signaling molecule that helps coordinate numerous biological processes by binding to NMDA receptors on cells. Glutamate released from nerve cells interacts with receptors in the lungs, helping to regulate coughing. The molecule also can bind to receptors on immune cells to modulate inflammatory and fibrotic (tissue scarring) activity that drives disease progression in IPF. 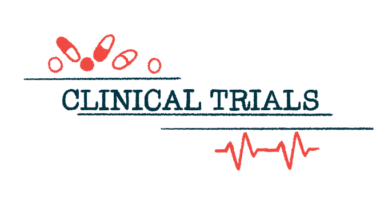