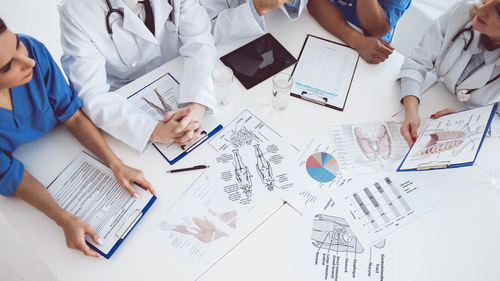 Ofev (nintedanib) can prevent disease progression in people with idiopathic pulmonary fibrosis (IPF) regardless of their prognosis at treatment start as staged by the GAP system, a new analysis of results from the Phase 3 INPULSIS trials show.

Analysis of INPULSIS pooled data were published in the journal ERS Open Research in the study, “Effects of nintedanib in patients with idiopathic pulmonary fibrosis by GAP stage.”

INPULSIS-1 (NCT01335464) and INPULSIS-2 (NCT01335477) were two pivotal Phase 3 clinical studies designed to confirm the efficacy and safety of Ofev in preventing or slowing IPF progression. These studies compared outcomes of IPF patients who took 150 mg of Ofev twice daily with those who received a placebo, for a treatment period of 52 weeks.

In this new re-analysis of the trials’ data, patients were grouped according to their GAP stage at the study’s start. The groups were GAP stage I (better prognosis) or GAP stage II/III (worse prognosis), and their outcomes in Ofev and placebo groups were compared.

GAP is a risk prediction index that estimates prognosis of a person with IPF based on the patient’s gender (G), age (A), and two lung physiology (P) variables — forced vital capacity (FVC) and diffusing capacity of the lung for carbon monoxide.

The GAP index and staging system provides a simple screening method for determining the average risk of mortality. As such, the system has been thought of as a tool for selecting patients for clinical trials addressing patients’ mortality.

Results showed that the rate of disease progression, as measured by the annual decline in FVC, was similar between patients at GAP stage I and II/III who were treated with Ofev.

The efficacy of Ofev in delaying FVC decline in these patient groups also was consistent with the treatment effect in the overall population of patients, as shown by previously published results of INPULSIS trials. This confirms the efficacy of the treatment and its beneficial effect on slowing disease progression compared to placebo.

Ofev’s positive effect was also found to be consistent across different patient GAP stages when using other measures of disease progression. Approximately 24.7% of GAP I patients treated with Ofev experienced an absolute FVC decline of 10% or more or death compared to 39.8% in the placebo group. In GAP II/III group, a similar response was seen in 29.3% of Ofev-treated patients and 42.9% of placebo-treated patients.

Based on GAP staging, the number of predicted deaths at the beginning of the trials was 79.9 and 55.2 in Ofev and placebo arms. However, at the end of the 52 weeks the number of deaths was lower, with 35 and 33 reported deaths in each arm respectively, representing a predictive accuracy of 43.8% and 59.8% according to GAP stage.

The fewer deaths in both treatment groups than those predicted by GAP stage suggest that enrolled patients had lower mortality than the general population of patients with IPF, researchers said. Still, treatment with Ofev was “associated with a relative reduction in the risk of mortality of 26.7% compared with placebo,” they said.

“This post hoc subgroup analysis of pooled data from the INPULSIS trials suggested that [Ofev] had a similar benefit on the rate of FVC decline across patient subgroups stratified by baseline GAP stage I versus II/III,” researchers stated.

These findings extend the results of previous studies demonstrating the benefit of Ofev across many subgroups of patients with IPF. Also, the team believes that they show that GAP staging may not be accurate for selecting patients for clinical trials testing anti-fibrotic therapies.

“GAP stage is unlikely to be a helpful tool for cohort enrichment in similarly designed clinical trials of pharmacotherapies for IPF,” they said.

Researchers add that some GAP stage-specific differences were seen in quality of life, time to first acute exacerbation, and rate of Ofev discontinuation. Although these differences were numerically greater with increasing GAP stage, they were not significant when comparing the groups. Additional studies are still warranted to further understand the clinical relevance of these results.