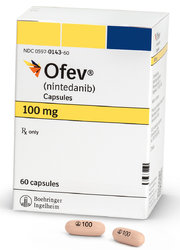 Idiopathic pulmonary fibrosis (IPF) patients received two pieces of good news just recently when the US Food and Drug Administration announced that it has granted approval for two IPF treatments: Esbriet® (pirfenidone) from InterMune, Inc., and Ofev (nintedanib) from Boehringer Ingelheim Pharmaceuticals, Inc. These two approved drugs are the first of their kind designed to treat IPF, marking a major accomplishment for the worldwide effort to provide IPF patients with a better, longer life, and eventually find a reliable cure to this rapidly progressing disease of unknown cause.

The Coalition for Pulmonary Fibrosis estimates that over 40,000 IPF patients die every year in the US, on average 3 to 4 months after being diagnosed. The disease causes severe and spontaneous lung-scarring that in a matter of weeks can greatly reduce lung function and deprive the vital organs of adequate oxygenation. This aggressive progression does not provide enough time to wait for a life-saving lung transplant, and patients are left with a reduced quality of life.

Dr. Mary H. Parks, the deputy director of the Office of Drug Evaluation II in the US FDA’s Center for Drug Evaluation and Research, lauds the two companies for their significant contribution to research and development on IPF. Both medications were granted a Fast Track status, Priority Review, Orphan Product, and Breakthrough designations. Ofev’s goal date for marketing approval was set at January 2, 2015, but it has achieved this milestone 3 months ahead of schedule.

Ofev works as a multiple kinase inhibitor, greatly reducing the occurrence of lung tissue scarring. It was established safe and effective after 3 intensive clinical trials that involved 1,231 IPF patients through the evaluation of the rate of decline in forced vital capacity of the lungs, which was noted to be significantly less in patients on Ofev compared to those receiving a placebo.

The drug is contraindicated in patients with existing liver problems, in women who are pregnant or suspect they are pregnant. Contraception should be used up to 3 months after taking the last dose of Ofev. Researchers observed the following common side effects in patients taking the drug: abdominal discomfort, upset stomach, diarrhea, elevation of liver enzymes, anorexia, cephalgia, weight loss, and hypertension.