US ‘Right to Try’ Law Meets with Mix of Praise and Criticism, Including Among Those with Rare Diseases President Trump kisses Jordan McLinn after signing Right to Try into law at a White House ceremony on May 30. (Photo by Michael Coleman/Albuquerque Journal)

As President Trump signed the recently passed Right to Try legislation into law in a White House ceremony, Jordan McLinn of Indianapolis tried twice to embrace him.

The third time, 9-year-old Jordan finally got the hug he wanted — as well as a kiss on the forehead. The video of that May 30 moment has since been viewed tens of thousands of times online. 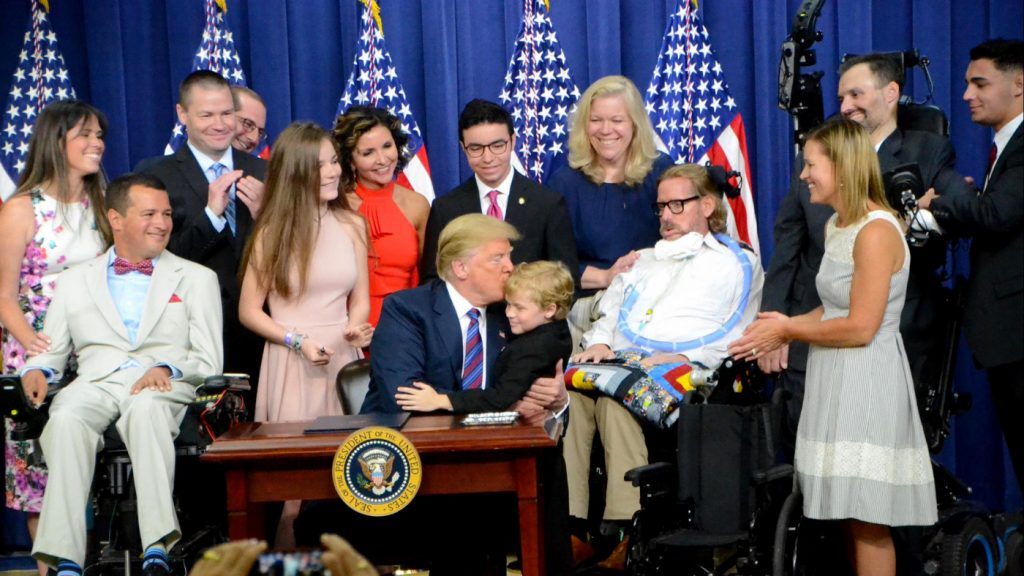 President Trump kisses Jordan McLinn after signing Right to Try into law at a White House ceremony on May 30. (Photo by Michael Coleman/Albuquerque Journal)

“It was pretty incredible,” Jordan’s mom, Laura McLinn, told BioNews Services – publisher of this website — in a phone interview from Indiana. “It’s not like being in Washington is anything new for us. Jordan and I have made 20 or more trips to D.C. in the last couple of years alone. But being there with the president in a roomful of people who have worked so hard to make this happen was something else. The president was so kind and sweet and compassionate.”

Jordan has Duchenne muscular dystrophy (DMD), a degenerative neuromuscular disease. He was the inspiration for Indiana’s Right to Try measure and was present when then-Gov. Mike Pence signed the bill into law in 2015, after the state legislature passed it unanimously.

Like McLinn, the passage of a national Right-to-Try (RTT) law — following the approval of similar laws by 40 states and the staunch backing of the conservative Goldwater Institute and Trump himself — has pleased a number of rare disease patients and their families who say a life-threatening or terminal illness has left them no other option.

“I’m glad it was passed, because any person battling a rare cancer will try anything to live,” said Greta Stifel, founder of Stifle Cancer Foundationin Milford, Connecticut, and a neuroendocrine cancer patient. “As a living, breathing survivor of a rare cancer, I should have the right to try anything and everything available without any government control or bureaucracy.”

Added Victor Riches, president of the Goldwater Institute: “We have given new hope to Americans struggling with a terminal illness. Federal law now protects the right of dying patients to obtain and use cutting-edge medicines without asking first for government permission.”

A game-changer or ‘publicity stunt?’

But others worry about the new law’s implications, warning that it could weaken existing protections for patients enforced by the U.S. Food and Drug Administration (FDA). Under those rules, 99.4 percent of patient applications to try an investigative or unapproved therapy have been granted since 2009 — most within a few days, the FDA states.

“In theory, I can see why Right to Try would attract Trump voters, but really it wasn’t necessary. The FDA already had a program that did almost the same thing, called Expanded Access, but it included more protections for patients,” she said in an email from Nashville. “People could get hurt by it if they try drugs that are unsafe.”

Bichell added that because children with Angelman syndrome generally live a normal life span, they likely would not be covered under RTT — but that under “compassionate use,” they might be able to access treatments that have yet to win FDA approval.

“The funny thing is that most families of people with Angelman end up waiting to see if clinical trials are successful,” she said, “because we are all wary of hurting our kids in the process of trying to help them.”

Sen. Ron Johnson,  chief sponsor of Right to Try in the Senate, acknowledged in a May 31 letter to FDA Commissioner Scott Gottlieb that among his goals was the possibility to “diminish the FDA’s power over people’s lives, not increase it.”

As reported by Bloomberg, the Wisconsin Republican said “this legislation is fundamentally about empowering patients to make decisions in cooperation with their doctors and the developers of potentially life-saving therapies. It is not meant to grant FDA more power or enable the FDA to write new guidance, rules or regulations that would limit the ability of an individual facing a life-threatening disease from accessing treatments.”

Gottlieb expressed initial concerns about the legislation, but has since said his agency will supportit.

Patient groups wade into debate, or choose to wait

The Cystic Fibrosis Foundation, for one, said it’s “disappointed” with the new law.

“It creates additional and undue risks for those seeking access to investigational therapies without addressing the primary access barriers” to those therapies, such as a limited supply of experimental treatments and manufacturers’ concerns, the CFF said in a May 31 press release.

The law, it noted, allows patients to receive unapproved therapies without FDA notification for up to one year; removes the FDA’s consultation on dosing, route of administration, dosing schedules, and other important safety measures; establishes no standards for informed consent; and prohibits the FDA from halting access to an experimental therapy, short of placing a clinical hold on all research related to that treatment.

“We recognize and share the sense of urgency around developing new and effective treatments for cystic fibrosis and getting them into the hands of people with CF as quickly as possible,” said the CFF, which is headquartered in Bethesda, Maryland. “Unfortunately, the Right to Try law will not provide greater access to unapproved therapies in the CF drug development pipeline.”

The Washington-based ALS Association, working to better treat and cure amyotrophic lateral sclerosis, both welcomed and voiced reservations about Right to Try.

“The ALS Association strongly supports initiatives to enable people with ALS to access promising treatments as soon as possible, including prior to FDA approval,” the organization said a statement emailed to BioNews. “The Right to Try law is an example of one approach to address the issue.”

But while the movement that led Right to Try has “helped propel pre-approval access into the national conversation,” it said, the new law “will still need to break down all the very real barriers that are preventing more people from accessing potential treatments.”

To do that, the ALS Association said it’s working with other patient advocacy groups, pharmaceutical companies, the Reagan-Udall Foundation, and the FDA to “speed the development and approval of promising treatments so that they are available to all patients.”

Others voiced no opinion, waiting to see how things played out.

The National Organization for Rare Disorders (NORD), an umbrella group of about 270 patient advocacy groups, had condemned the bill in a Feb. 6 letter to lawmakers that was endorsed by 37 groups including the ALS, the CFF, the Friedreich’s Ataxia Research Alliance, the Leukemia & Lymphoma Society, the Pulmonary Fibrosis Foundation and the United Mitochondrial Disease Foundation.

That letter warned the bill “may possibly harm patients by exposing them to bad actors looking to profit off of false hope.”

But McLinn, Jordan’s mother, said she doesn’t think that’s even possible under Right to Try.

“There is no financial profit to be made by a drug company if they agree to RTT,” she told us. “They are not allowed to make any money off the drug until it’s been FDA-approved. And bad actors don’t spend billions of dollars to get to Phase 2 of a clinical trial.”

Still, according to NORD, the Senate version that would later become the basis of the law — as opposed to an earlier House version — offered a troubling lack of protections. Specifically, the Senate version (S.204) failed to set a standard for informed consent, had a much broader defintion of eligibilty, and contained vastly weaker reporting requires, NORD said in a May 22 statement.

Alesia ONeal, a sarcoidosis patient for the last 20 years, has no doubt that Right to Try will be good for patients.

“I lost everything,” ONeal, who is single, said in an email from Carlsbad, California. “What’s worse, the doctors couldn’t offer me a treatment that was effective enough to slow the progression of my disease. I asked for a particular treatment that wasn’t yet approved and was denied. I got so sick that I ended up in a bed for 10 years.”

Frank Rivera, president of New York’s Sarcoidosis of Long Island, is also a staunch supporter of RTT, having been denied entry to five clinical trials and rejected twice for compassionate use.

“I know that other rare disease organizations were against this bill because they believed it would give people false hope,” said Rivera, 50. “I understand that, but I feel they underestimate the patients, doctors and families. Even if they make a rush decision, that’s up to the patient who is terminally ill. If a treatment wouldn’t help me, I wouldn’t use it.”

Bruce Ward, an Arkansas father of an 8-year-old boy with Duchenne, said that in the past, most pharmaceutical companies working on DMD treatments declined to make such treatments available for compassionate use.

“We will have to wait to see if these companies choose to make their products available via RTT and how they price them,” Ward said by email. “While we are waiting, I hope we can focus on this as an additional tool for treatment and put aside our political stances and personal grievances.”