Cash-strapped governments across the 28-member European Union are struggling to control runaway healthcare expenditures — at exactly the same time as the promise of new but expensive therapies to treat rare diseases has never been greater.

That’s the paradox faced by pharmaceutical companies as well as patient advocacy groups in Europe, where roughly 10 percent of the gross domestic product (GDP) is spent on health. It was also a major theme at the recent World Orphan Drug Congress in Barcelona, Spain. The November event attracted some 500 drug industry executives, researchers, patient advocates, and others, including Nathalie Moll, director general of the European Federation of Pharmaceutical Industries and Associations (EFPIA).

“What’s interesting is that very often, the cost of orphan drugs is not put into the context of the wider healthcare picture,” Moll told BioNews Services, publisher of this website. “It ranges between 3 percent and 5 percent of all pharmaceutical expenditures, which itself is only 15 percent of all healthcare expenditures in Europe — and it’ll remain like that at least through 2020.”

EFPIA, headquartered in Brussels, is an umbrella group representing 33 national associations and 40 manufacturers. It speaks for an industry that employs 750,000 people across Europe and spends more than €35 billion ($40 billion) annually on research and development.

Moll said that orphan drugs such as Biogen’s Spinraza (nusinersen) for spinal muscular atrophyare often criticized for being excessively expensive — yet generics have lately gotten far more bad press in that regard.

“What’s sensational about orphan drugs is that they are revolutionary in their science. A gene therapy will actually cure the disease or turn a death sentence into a manageable disease,” Moll said. “They’re treating diseases nobody knows anything about — so it creates mystery and misunderstanding. People try to understand it by referring to things they know, but you cannot do that when referring to orphan drugs.”

To correct those misperceptions, she said, “we must communicate what orphan drugs are, how they treat rare diseases and how risky it is. You can’t even do a clinical trial in some cases because you don’t have enough patients. You need to communicate all these complexities, so when there’s a public debate, the people who are witnessing it will have the tools to understand what we’re talking about.” Ségolene Aymé is the founder of the Paris-based rare disease internet portal known as Orphanet. She noted that the monthly median cost of cancer treatments at the time of approval by the U.S. Food and Drug Administration has skyrocketed from about $50 in 1965 to nearly $50,000 in 2016.

“It’s even worse with orphan drugs,” she said, adding that the proportion of reimbursed products of 11 common rare-disease medicines ranges from 100 percent in Belgium and 91 percent in France to only 25 percent in Sweden.

In the case of Spinraza — which retails for $750,000 for the first year of treatment and $375,000 every year after that — 24 out of 28 European member states have now agreed to reimburse the cost of this medication. Poland’s Ministry of Health announced its positive decision on Dec. 17, leaving only four EU members that still don’t cover the injectable medicine: Estonia, Ireland, Latvia, and the U.K.

“We have to find a solution, because while governments are trying to cut healthcare expenditures, the number of very promising molecules in development is increasing,” Aymé said. “We already know that what was once considered possibilities in the past are now realities, and that with technological advancements and increased knowledge about rare diseases, we are going to be able to treat most of these diseases in the future.”

Of the 7,000 or so known rare diseases, “maybe 2,000 or so are approachable,” said Gregory LaRosa, MD, senior vice president and head of scientific strategy at Pfizer.

At an executive roundtable titled “Why Are We Pursuing the Same Diseases?” LaRosa said his company — better known for common prescription medications like the cholesterol-lowering medication Lipitor (atorvastatin) and Viagra (sildenafil citrate) for erectile dysfunction — now has seven rare-disease products on the market in 81 countries. 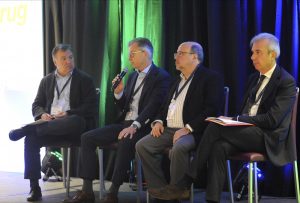 “A lot of people don’t realize that Pfizer is also a rare-diseases company. But we don’t want to get spread too thin and get nothing done. For many of the non-genetic rare diseases, we know what the gene is, we know what’s wrong, and can certainly envision ways to treat it,” he said.

“With the advent of RNA-based therapies and gene therapies, there are now so many more weapons in our quiver to tackle these diseases,” LaRosa said. “It just comes down to getting the regulators and payers on board and up to speed. We need to continue that vein of partnership to keep up with the pace of scientific innovation that’s really exploded in the last decade or so.”

Added Carlo Incerti, MD, senior vice president and head of global medical affairs at Sanofi Genzyme: “When it comes to a new therapeutic area, scientific understanding is essential. Then, of course, there must be a gap that needs to be fulfilled — an approachable gap where you can, if possible, develop a therapy that eventually transforms a patient’s life. Only if you can do that, do you have the possibility of transforming your therapeutics into something that provides value.”

Or, put another way, “medication has to get to the patient, and as fast as possible,” according to Andreas Busch, MD, chief scientific officer at Shire.

“In order to do so, we look at diseases that have a big medical need,” Busch said. “Success for us and our patients will come through focusing on deep expertise in biology and certain technologies, then driving one, two or three areas forward and getting them to the patient, rather than not helping anyone by diluting our efforts across many diseases.”