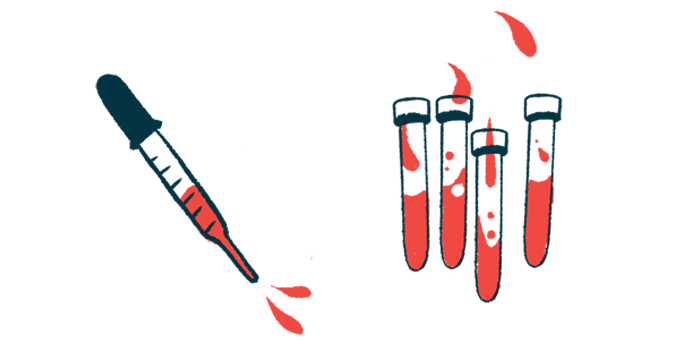 The degree of collagen degradation, a process called collagen turnover, evident in a person’s blood at the time idiopathic pulmonary fibrosis (IPF) is diagnosed predicts the severity of disease progression within one year, regardless of antifibrotic treatment, a study reported.

These findings support the use of collagen turnover as a blood biomarker to monitor ongoing disease activity, helping doctors “to identify patients at high risk of disease progression,” the researchers wrote.

Predictive biomarkers of progression are of particular importance, they added, because “the only curative treatment for IPF is lung transplantation, but identification and timely referral of eligible patients can be a clinical challenge.”

The study, “Turnover of type I and III collagen predicts progression of idiopathic pulmonary fibrosis,” was published in the journal Respiratory Research.

A hallmark of IPF is the buildup of the extracellular matrix (ECM) in the lungs, which is a network of molecules and proteins, such as collagen, that surrounds and supports cells. The excess accumulation of ECM leads to the thickening and stiffening and scarring (fibrosis) of lung tissue, making it difficult to breathe.

An increase in the activity of enzymes that degrade collagen, called matrix metalloproteinases, has been linked to IPF progression. As such, biomarkers that reflect this degradation process — collagen turnover — may provide important information about ongoing disease activity.

Studies have shown that the turnover of two forms of collagen, type I and type III, is elevated in IPF patients with progressive disease, relative to those with stable disease. But it has only been measured over six months, and in patients who have yet to be treated.

Whether enhanced type I and III collagen turnover occurs in those with more mild disease or in patients given antifibrotic treatment is unknown.

“Currently, there is no biomarker or clinical score to predict or identify disease progression in IPF patients treated with antifibrotic therapy,” the team wrote.

To find out, a team led by investigators based at Herlev and Gentofte University Hospital in Denmark recruited 178 IPF patients enrolled in the real-world Pulmonary Fibrosis Biomarker (PFBIO) cohort (NCT02772549), which provides ongoing follow-up and the collection of biological samples.

Patients were recruited immediately after or within two months of diagnosis, and were treatment naïve at the beginning of the study (for baseline measures). Two approved antifibrotic IPF therapies, Ofev (nintedanib) and Esbriet (pirfenidone), were available during the study period, and participants were grouped by whether they were treated or not. Only patients in the PFBIO study with data from baseline, and six- and 12-month visits were eligible.

Blood samples were collected at each visit, and analyzed for one type I collagen degradation product (C1M) and two type III collagen products marking its formation (PRO-C3) and degradation (C3M). Participants were then further categorized based on low, medium, or high blood levels of C1M, C3M, and PRO-C3.

Their mean age was 73.8, and 76.4% were men. Those not receiving antifibrotic therapy were older and walked a shorter distance in six minutes (a test of exercise capacity). Progressive disease was found in 84 patients (47.2%) at 12 months post-diagnosis.

Results revealed that patients with medium levels of C1M at baseline had a 2.3 times higher risk of disease progression, while those with high C1M were 2.7 times more likely to progress. Similarly, medium PRO-C3 levels were associated with a 2.33-fold greater risk, and 2.41-fold for those with high PRO-C3 levels. Baseline C3 was not related to disease progression risk.

Similar results were seen after adjusting for differences in treatment.

Compared with stable patients, those with progressive disease had significantly higher C1M over 12 months, with an average difference across timepoints of 18%. Significantly higher levels of PRO-C3 over 12 months were also seen in progressive disease patients, reflecting an average difference of 22%. Again, no differences were observed in C3M between stable and advanced patients. The team reported similar results after excluding participants who died during the study period.

Finally, a comparison between treated and untreated patients, and those treated with Ofev or Esbriet, found no change in C1M, PRO-C3, or C3M over 12 months.

“Our findings suggest that future studies of type I and III collagen turnover as prognostic [predictive] biomarkers in IPF are warranted,” they added, as “PRO-C3 and C1M may be potential biomarkers for a progressive disease behavior in IPF.”